Ocean Parks Heights started to grow rapidly during 1920s and people saw the potential for transforming into an integrated city and finally in 1924 it became Mar Vista. After two years of being recognized as Mar Vista, the government decided not to amalgamate, but instead annex to Los Angeles. After a year, in 1927, Mar Vista became a part of Los Angeles. Maximum of the area was a typical farmland where major crop was lima beans, so Mar Vista became popular as a part of the Lima Bean Belt of the nation.

Since the Lima Bean era, Mar Vista has become highly diverse as a commercial and residential neighbourhood on the Westside of Los Angeles.

The United States survey in 2000 counted approximately 35,500 residents in the Mar Vista neighbourhood of approximately 2.9 square miles which means that 12,300 people per square mile. Population increased by 2,000 people in 2008 and the median age for residents was 35years, which was considered the average for Los Angeles. In 2008, average household income was $62,611 per year, which is considered an average figure for Los Angeles. Renters had occupied 60% of the housing stock while apartment or house owners have held the rest of the 40%. Mar Vista is filled with large yards, streets lined beautifully with trees and neighbours who know each other for generations. The place is close to the beach and ethnically diverse. In short, it is almost everything that Venice was supposed to be. Some of the homes in Mar Vista even open up with a glassy view of the Pacific.

People who had land in the Mar Vista do not really leave. Instead of leaving, homeowners have been modelling up so the originally built small homes are blossoming into architectural masterpieces. Garages in neighborhood have been rehabilitated into beautiful art studios which belong to a handful of talented artists.

One of the proud spots in Mar Vista is its Sunday Mar Vista Farmer’s Market, which was coined by a handful of younger residents with a great vision. Just like City Councilman Bill Rosen Dahl, Mar Vista has also has been raised from being a sleepy state to become a part of the modern world, which is a result of combined efforts. Today, the market has been the small town charm found in Mar Vista cannot be found in any other neighbourhoods of Los Angeles. As mentioned earlier, the sidewalks shaded by trees makes the place unique along with the growing up of residents together. Most of the people in Mar Vista know each other and they enjoy living like a family. Mar Vista Farmers Market is a gathering place for all the people where they get to see each other every Sunday in order to support farmers and local businesses. People enjoy the sturdy sense of community and enjoy the prime location by visiting beachfront which is three miles away from Mar Vista.

Mar Vista has been seeing a huge resurgence in the eyes of homebuyers and developers. There is a lot of activity right now and many homes are being sold with multiple offers over the asking price. The city of LA has placed a temporary moratorium on building so many of the homes are being updated or remodelled as it is almost impossible to add square footage at this moment in time. That being said Mar Vista is a wonderful neighborhood that is getting the attention it deserves and consequently is seeing a resurgence of activity in its commercial districts as well with new restaurants and stores popping up left and right.

More information on our favorite stores and restaurants coming soon…

This magical 1915 craftsman bungalow is enveloped in mature greenery and original charm. If you've been dreaming of peace and privacy this home offers it all. Enter the l...

This magical 1915 craftsman bungalow is enveloped in mature greenery and original charm. If you've been dreaming of peace and privacy this home offers it all. Enter the l...

Available for the first time in over 30+ years this highly desirable property located in Mar Vista which borders the Silicon Beach towns of Venice & Santa Monica. Th...

Looking for your own private getaway? Here it is! An oasis prodigious enough to entertain by the dozens or live comfortably day to day. The main home has been lovingly an...

Gorgeous 4 bedroom, two bathroom home, tucked away in well desired Mar Vista Neighborhood, minutes away from Venice Beach. This custom home was rebuilt in 1986 and upgra...

Based on information from California Regional Multiple Listing Service, Inc. as of . This information is for your personal, non-commercial use and may not be used for any purpose other than to identify prospective properties you may be interested in purchasing. Display of MLS data is usually deemed reliable but is NOT guaranteed accurate by the MLS. Buyers are responsible for verifying the accuracy of all information and should investigate the data themselves or retain appropriate professionals. Information from sources other than the Listing Agent may have been included in the MLS data. Unless otherwise specified in writing, Broker/Agent has not and will not verify any information obtained from other sources. The Broker/Agent providing the information contained herein may or may not have been the Listing and/or Selling Agent. 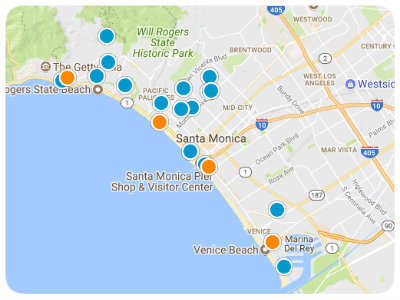